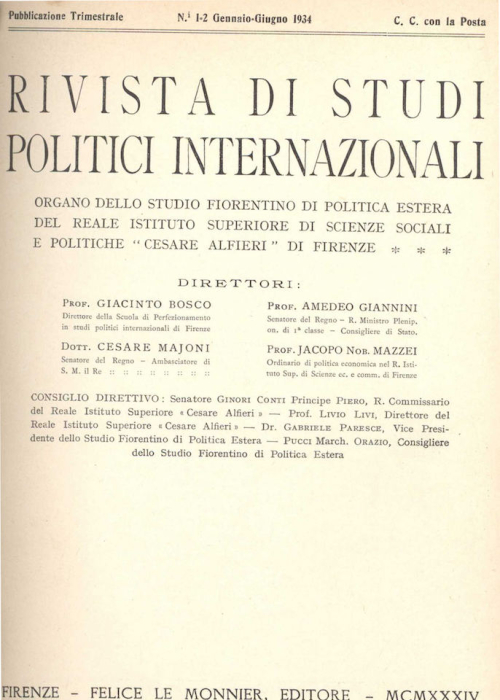 Rivista di Studi Politici Internazionali (RSPI) was founded in Florence in 1934 by a group of eminent scholars, members of the most ancient Italian University institute of political and social sciences “Cesare Alfieri”. Their purpose was to spread international studies and emphasize Italy’s representation abroad, while moving toward a more decisive participation in the European political game. As a quarterly review, RSPI started publishing political and scientific contributions on current affairs: essays, articles, profiles of statesmen and diplomats, briefings and documents, reviews of books.

The dividing line, in Italian history, of 1943 marked the passing of RSPI to private property which a few years later, in 1947, was unified in the hands of Giuseppe Vedovato, Professor of International Law and of History of Treaties and International Politics, who would have been its editor till 2005. Soon becoming an actor on Italian and European political scene, Vedovato made RSPI and the related series La Biblioteca a transnational agora on international issues, both historical and actual, with a special focus on the European integration process. RSPI offered research papers, presented different theses on crucial controversies, drove attention to relevant diplomatic documents. 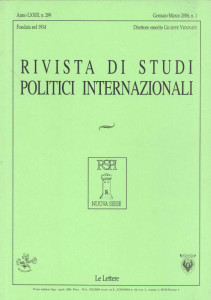 RSPI-Nuova Serie, which aims to bare the complexity of the international framework, has a multi-disciplinary approach and hosts contributions of authors coming from all Continents. It is a peer review, stored in international databases as Ebsco PoliticalScience Complete, and it is included in JSTOR’s Archive. The previous website was edited by Sapienza Università di Roma. This new one started in 2015.

RSPI-Nuova Serie is an independent and international journal. It is open to different forms of inquiry, welcomes comparative approaches and set up a working alliance among specialists of all branches of social sciences and humanities. It opens to papers in Italian, English, French, Spanish and offers abstracts in English, French and Italian.

Presenting research and interpretations on all aspects of international relations, RSPI-Nuova Serie arouses the interest of historians, economists, jurists and political scientists, as well as the attention of a wider audience: politicians, diplomats, journalists, officials, and opinion leaders.