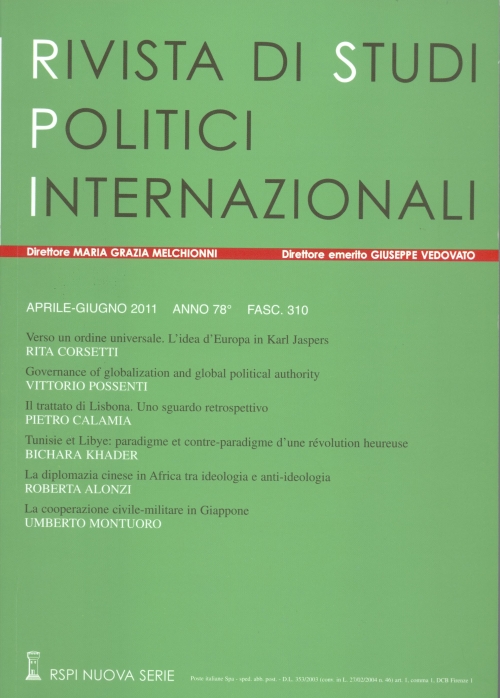 The article analyses the idea of Europe elaborated by the German philosopher Karl Jaspers. During the Twenties and the Thirties Jaspers criticized the supremacy of modern technology on society.

The recent big world crisis, economic but also political, has brought in again the question of a better operation of financial system, of governance of globalization and its failures. Among these failures momentous is the permanent deficit of the political factor, and consequently of a world political authority responsible for the main systemic decisions.

The article goes through the various political stages of the Treaty, since the Laeken European Council (2001), the Convention chaired by Giscard d’Estaing – with Amato and Dehaene –, the referenda in different countries and the final entry into force on 1st December 2009.

In this year 2011 the political landscape of the Arab world was revolutionised and along the Southern shore of the Mediterranean authoritarian regimes have come to a deep crisis. The Author examines the cases of Tunisia and Libya. In Tunisia the Jasmine revolution was successful thanks to a society relatively modernised and to an army ready to fraternise.

China’s engagement in Africa is nothing new but an effect of the ‘three worlds’ Mao doctrine. However, the post-Mao era marked the turning point from ideological to economical perspective, the Black Continent making a good source of power and raw materials.

The first perspective that caught the attention of worldwide television audiences looking at the dramatic images of disaster in Japan was the surreal composure of Nipponese citizens during and after the event. But which is the organizational model for Japanese efficiency? And moreover, is this behavior derived only from a broad awareness program in schools and in society, or is it also dictated by an integrated stance in frequent collective exercises and sound doctrinal foundations?