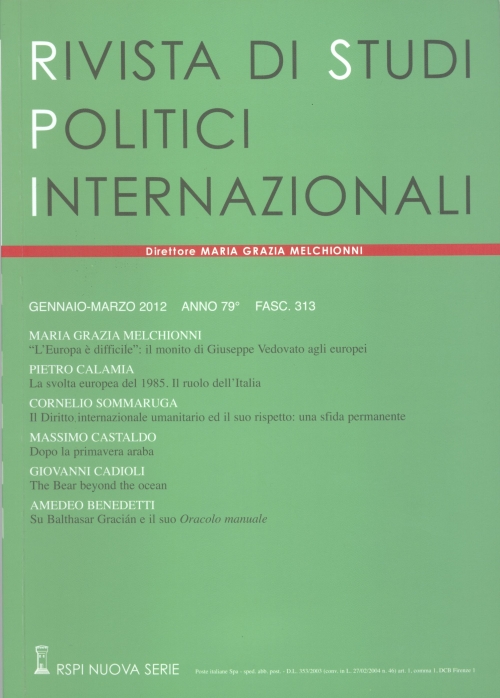 The Author, at the time Permanent Representative of Italy to the European Communities – and signatory of the adhesion treaties of Spain and Portugal – recalls the final part of the negotiations
(which had started in 1977). At the beginning of the Eighties, the Community was blocked by the British budgetary question, finally somehow solved in 1984 at the Fontainebleau European Council led by François Mitterrand.

The respect of the Geneva Law (ius in bello) is the permanent challenge for the Icrc and for the States signatories of the Geneva Conventions and the Additional Protocols. In this context customary law is essential. The proposal is advanced for a biannual Conference of State parties at high level to be convened and chaired by the Depositary State as to the stand of respect of International Humanitarian Law.

The revolts in the Arab world brought religious organizations on the fore-front. In Egypt, Tunisia and Morocco, where free elections were held, the Muslim Brotherhood got the majority of votes.
In Egypt its party Freedom and Justice won the relative majority of seats in Parliament, followed by the party al-Nour of the Salafists, a fundamentalist organization. The Muslim Brotherhood is the most popular religious organization, it was established in 1928 with the purpose of opposing Western influence and restore political Islam.

The Bear beyond the ocean. Kremlin’s relations with Latin America as a crucial step for Russia going back to a great power status

Since the year 2000 and the election of V. V. Putin as President of the Russian Federation, the international arena saw a fast and consistent rebirth of Russia as a global power. Most of the existing academic research in favor and against this statement have focused on the Eurasian geopolitical arena, partially neglecting the importance of another crucial area, the Latin American one.

The paper focuses on the Oráculo Manual y Arte de Prudencia by Baltasar Gracián. We propose a pragmatic approach to Gracián’s famous book, by highlighting a few passages and comparing
them with analogous statements of other great personalities, like Ignatius of Loyola and Niccolò Machiavelli. Our focus is on the aspects of Gracián’s work that are still valid today. Among these we mention the decisive role of prudence, as well as the importance in self-promotion of knowledge, of perfectionism, and of psychological observation.

With a lot of humour it is argued in the article that Brics is a wonderful creature. It was a fantasy at first. A scientific term minted. In reality there was no such structure. Now it not only exists but also develops swiftly with active Russian participation. It accumulates negotiating formats. It starts to have a mounting influence on world processes. A token of further strengthening of the Brics is that it gives a lot to its members.