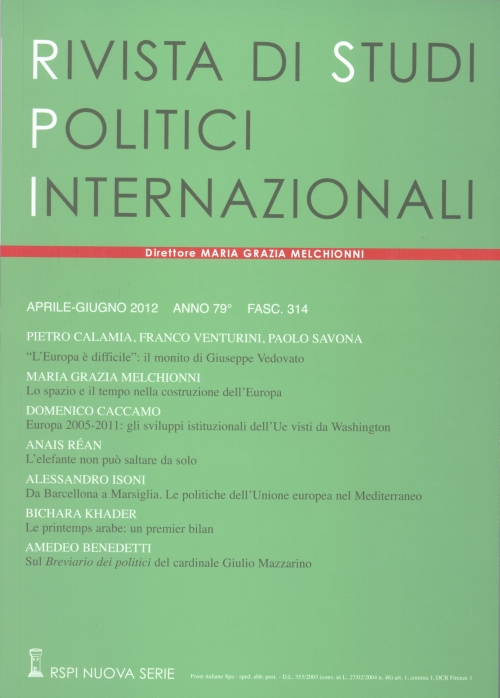 The article describes the originality of the European integration process and recounts, rapidly, its evolution on the base of the main coordinates of international life: space and time.
Progressive transition from Little Europe to enlarged Europe, to Paneurope and, at the same time, from Cold War to détente, to globalization represents, therefore, the reading-key of the European design’s evolution in all its aspects: political, institutional, economic, social and cultural.

This essay esamines a segment of the European integration process, characterized by a substantial acceleration of the institutional development within the Union framework. A first achievement was represented by the Refom Treaty signed in December 2007, a second by the Fiscal Pact negotiated in December 2011. In the same period various projects entered in competition, aimed at the European energy security: the decline of the Nabucco project, originally sustained by the Usa, was compensated by the opening of the first section of North Stream, agreed upon by Russia and Germany.

India is a political, economic and military power that lacks the recognition of the other selfdeclared ‘giants'. Its dynamism could however redefine the equilibria on both a regional and a
global scale. The distinctive features of the Indian subcontinent indicate both the potential and limits: if identified and dealt with correctly, they could constitute a cultural and political model
within the international system. An asymmetric democracy, born out of a diversified society, guarantees the solidity of the system.

The paper analyzes the history of European cooperation in the Mediterranean Sea. Starting from the Cold War period and from the decolonization process, the Author tries to reconstruct thepolitical premises and the interventions implemented by the European Economic Community, analyzing the limits of a similar Eurocentric approach. After the Berlin Wall fall and the
Maastricht Treaty, new opportunities offered by the enlargement towards East suggested the European Union to start a Euro-Mediterranean Partnership with North Africa and the Middle East
States, in order not to lose a strategic area for the European security.

Since 2011, the democratic upheaval in the Arab world continues unabated. Bel Ali of Tunisia has fled. Moubarak of Egypt has been forced to quit. Ali Saleh in Yemen reluctantly accepted to leave
his post. And Khaddafi has been killed. Bahrein Monarchy resists the wave of change with the help of Gulf States and the Usa. Syrian regime is trying to smash the rebellion into pieces relying
on the incapacity of the United Nations to adopt harsh measures. Other countries are no exception and are exposed to this democratic wave. Where elections took place, islamist movements won the bets, to no surprise.

The article concerns the Breviarium politicorum of Cardinal Giulio Mazzarino. The Autor provides a pragmatic approach to Mazzarino’s fundamental book, by highlighting a few passages
and comparing them with analogous statements of other great personalities of the XVII century, like Baltasar Gracián or Armand Jean du Plessis, Cardinal-Duc de Richelieu. The focus is on the aspects of Mazzarino’s work that are still valid today, among which the decisive role of imperturbability, the importance in self-promotion of knowledge, of perfectionism, of language, and of psychological observation.