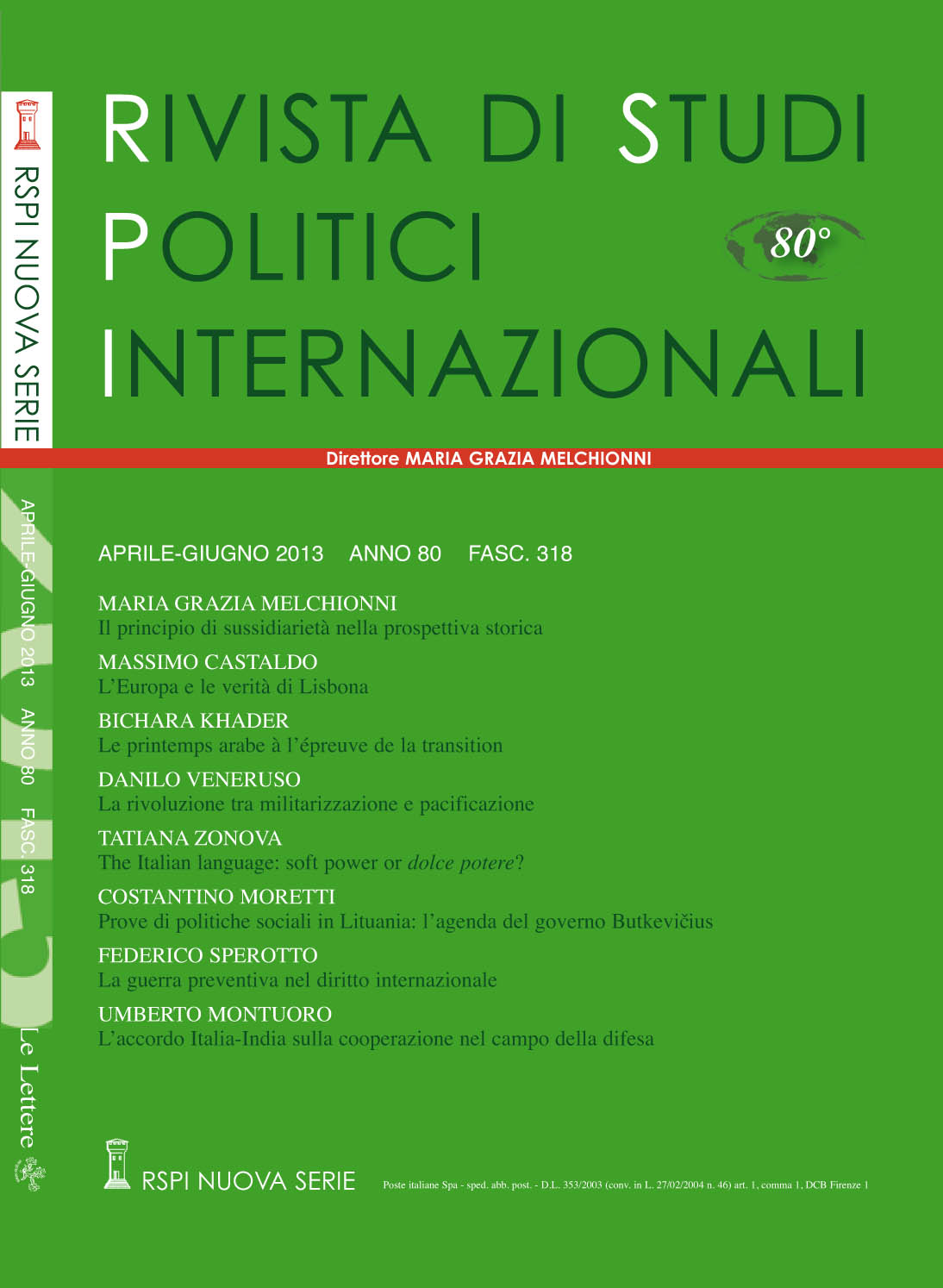 TThe article analyses the origins and the development of the subsidiarity principle, going back to St. Thomas and his teaching on the Christian foundation of the city, on the necessity of a special
order religiously inspired, based on the dignity of human beings and the solidarity of the family of peoples. This synthetic formula, rediscovered during the rebirth of Thomismin the first half of the
19th century, was made more explicit in the ardour of the discussion which opened up in the following decades on the social question and, after 1870, on the theme of relations between State
and Church, appearing also in encyclical letter of Leo XIII Rerum Novarum (1891).

The two treaties issued by the Conference of Lisbon (2007), that reviewed, amended and unified the vast and complex array of European rules, followed a path opposed to the one of the fallen
constitutional treaty. The mandate for the Lisbon Conference stated that the two new treaties, the treaty of the European Union, which deals with the Union’s organs, and the treaty for the Union’s
functions, which deals with the Union’s range of activities, «shall not have a constitutional character». This instruction signifies the will of the members States to exclude that the Union could become a sovereign super State. Consistent with this course, the new rules confer to the Union Council the powers of a government and reduce the Commission to an executive organ, strengthen the position of the members States and of the national Parliaments.

After a popular uprising which led to the toppling of the authoritarian regime of BenAli, Tunisia has entered a period of transition towards democracy. But this period proves to be thorny, difficult and not bereft of huge challenges. But this is almost common to all transitions. This paper seeks to analyze other historical experiences of transitions towards democracy (in Latin America, Southern European countries, Eastern and Central European countries).The purpose is not to look
for models to be reproduced inArab countries, but to draw lessons from past experiences in order to avoid unforeseen traps, to shorten the period of transition, and to lessen the social and economic cost of uncertainty.

There is no revolution which could be generated by hatred: as written in the Gospel, revolution is «fire on the earth» brought about by love (Luke, 12, 49). This statement had been neglected until the beginning of nineteenth century. In that period political and social movements, self-considered revolutionary, together with the huge development of science and technology, showed the threat to human race of being destroyed. For this reason, there have been attempts to restore the link between Christianity and revolution which excludes militarization, source of death, and
promotes peace, source of life.

Language, by definition, is an effective tool of soft power or as the Italians say dolce potere. Language is a channel for the transfer of information, it is away ofwinning confidence, and a vital instrument of business and cultural communication. Surveys show that the Italian language has become the most popular among young people. Today there are about 70 million Italian speakers
in the world. Within the Eu, Italian is second only to German in terms of the number of native speakers. Being an important part of Italian public diplomacy, the policy of italophonia is a strategy that aims to create an international Italian-speaking community and build bridges between Italy and those beyond its borders who speak or want to speak Italian.

According to the new center left government of the Republic of Lithuania, led by Algirdas Butkevicˇius, the system of social guarantees is relatively low in the country.
This is why the programme of the government, approved by the Parliament last December, has an ambitious goal: to proceed along the path of building awelfare State, so that the Lithuanian people
would live in dignity, safety and happiness. The worsening of the economic and financial situation in Europe has boosted the debate on the social dimension of the European Union. The Lithuanian Presidency of the Eu Council (July- December 2013) could make steps to strengthen the Eu as a global model of social security.

The recent military initiatives of North Korea have brought again to the attention of analysts of international problems the question of the lawfulness of a pre-emptive strike, already discussed when the United States decided to invade Iraq. According to some commentators an airstrike against the North Koreanmissile installations by the United States would be amodern application of Daniel Webster’s doctrine, and would qualify as an act of anticipatory self-defense. Other analysts believe that an act of that kind would be a violation of international law.

In the aftermath of the resignation of the Minister of Foreign Affairs, a renowned ambassador member of a technocratic government, announced to the House of DeputiesMarch 26, 2013, and
the subsequent declarations of opposite content by the Minister of Defence, pro tempore, the military now appears to have become more protagonist.

The article concerns the Memoirs of Paul Gondi, cardinal de Retz (September 20, 1613 –August 24, 1679), political agitator in the Fronde. The Author provides a pragmatic approach to Retz’s
fundamental book, by highlighting a few passages and comparing them with analogous statements by other personalities of the Seventeenth century, like Baltasar Gracián, Richelieu or Cardinal Mazarin.All of them are known for their narrative skills and outstanding characters. The article’s focus is on the aspects of Retz’s work that are still valid today.Among these we mention
the study of popular mind.