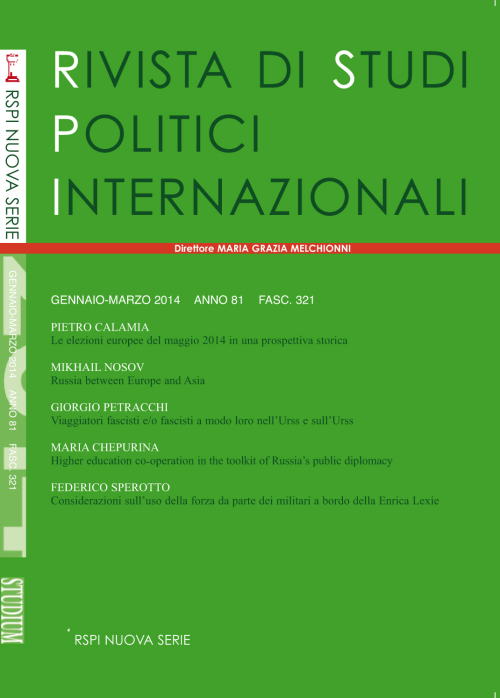 The Author, former Permanent Representative of Italy in Brussels, recalls some key moments in the institutional evolution of the European Parliament, such as the decision for the direct election
in 1975 and the ‘total rejection’ of the 1980 Communities budget, a few months after the 1979 first election.
The Italian Presidency had put the direct election’s question as central at the Rome European Council. The article mentions some little known elements of the 1975 discussions among Heads
of State or Government.

Russia between Europe and Asia

Due to its history and geography Russia is a two-continental State, one third of which belongs to the Eastern part of Europe and two-thirds to the Northern part of Asia. Ethnically, over 80% of the
Russian people are Slavs, less than 20% are Asians. For over two centuries geographical and ethnical differences have served as a breeding ground for discussion among Russian intellectuals,
who, up to now, have not been able to determine to which part of the world Russia belongs.

Many Italian journalists, both fanatical fascists and fascists in their own way, visited Soviet Russia between the two world wars. In the early Twenties, the period of New Economic Policy, they went to see what remained of the ‘old Russia’; in the Thirties, the period of Five Year Plans, they went to discover the new world that was being constructed. In both cases the mood in which they went to the Ussr was not that of ‘political pilgrims’, as it happened with the majority of alienated Western intellectuals, but one of curiosity to understand Bolshevism, Fascism’s ‘spurious twin’, born out of the same mother: the Great War.

Since the middle of the XX century, higher education has seen an unprecedented global diffusion which led to its increased political role. As knowledge and the capacity to apply it in practice
become the strategic resources of the XXI century, higher education both reflects and effects new times, having the potential of supporting but also subverting policy agendas. Today, the role of
higher education is increasingly growing in all spheres of life, including in foreign affairs. The diplomacy in the XXI century is changing in a radical and visible way, becoming very different
from what it traditionally was: government-to-government relations conducted by diplomats. Developing the country’s soft power and a positive image abroad by working with foreign publics
is now key to creating an enabling environment for its foreign policy initiatives and international standing in general.

On February 15, 2012, off the coast of India, two Italian marines belonging to a military detachment in charge of defending a tanker against acts of piracy opened fire on the occupants of a fishing boat, in the belief of being under a pirate attack. In addiction to a diplomatic incident and several interrogatives concerning the authority having jurisdiction on the case, the incident has
raised some issues related to the use of force during military operations abroad.