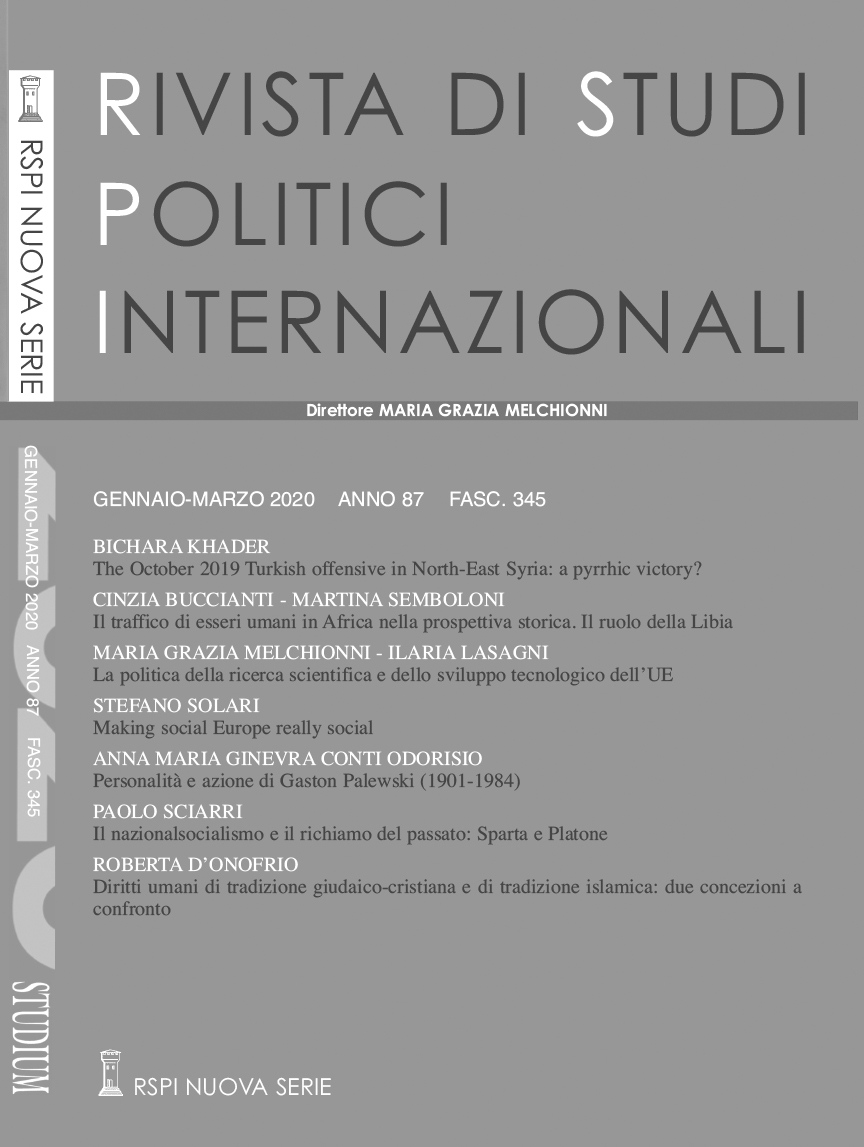 The October 2019 Turkish offensive in North-East Syria: a pyrrhic victory?

Code-named “Peace Spring”, the third Turkish offensive in North Syria, on October 9, 2019 is no surprise: it is simply a continuation of a consistent Turkish policy whose aim is to prevent the establishment at its southern border with Syria of a so-called “Kurdish corridor of terror”.

Slavery was a social emergency in the past and today, in different ways, still represents a problem not sufficiently understood and coped with by the institutions all over the world. The sub-Saharan route was one the most ancient and less studied caravan roads in the course of history.

A true policy of scientific research and technological development was started in Europe, in the 1980s, not to lag behind the improvements of information technology and biotechnology achievedin the USA and in Japan. The first Framework Program launched in 1984 aimed to coordinate the programs which involved the member Countries of the EU, as only in 1986, by the Single European Act, the EC got the competence in scientific and technological matters.

The aim of the paper is to argue that the implementation of solidarity schemes in the EU should not be conceived as a compensatory measure for the costs and damages of the EMU and its inability to curb financial instability. Actually, Maastricht had to lead to political Union and to some form of solidarity, but that remained always vague and was not implemented.

In this article the Author reconstructs the different phases of Gaston Palewski’s political career. He cooperated with Lyautey in Morocco until 1925, then with Paul Reynaud in France from 1928 to 1940, and finally, after the Nazi invasion of France and refusing to recognize Petain’s armistice, he became de Gaulle right arm in London, the first gaullist in history, as he called himself.

The essay intends to investigate the link between National Socialism and classical culture, focusing on the Nazi rediscovery of the myth of the ancient Greek city of Sparta and Platonic philosophy. For the drawing up of the following article, books and manuals were used in particular, as well as documents, articles, historical and philosophical journals

After the end of World War II, the devastations and the atrocities occurred during the years of the conflict encouraged the international community to establish an intergovernmental organization with the purpose of settling controversies between States by peaceful means. An intergovernmental organization, the United Nations, was established in 1945.