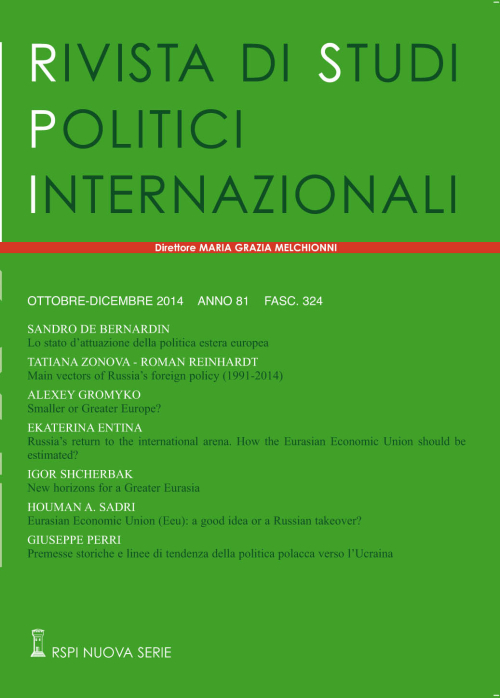 European foreign policy is not developed enough due to the lack of European political integration.
Nevertheless, one cannot deny that a European foreign policy exists. indeed, all European partners display a genuine interest in achieving convergence on how to handle international affairs. When they fail to do so, each of them feels that something went wrong for the common
interest and should be repaired.

The article casts light upon the evolution of russia’s approaches to foreign policy throughout the period of 1991-2014 conditioned by changes of the geopolitical situation, shifts on the world arena, as well as the transformation of the country’s position thereon. it provides an acute insight into the major dimensions of russian foreign policy, in particular relations with the Usa and Nato, the European Union (eu) and the Commonwealth of independent States (Cis).

The author states that the national interests of russia with its vast territory, innumerable natural and mineral resources, a well-educated labour force and valuable human capital demand from
russia strategic relations with europe, asia and other regions and continents, in other words: a transregional foreign policy with global elements.

Russia’s return to the international arena. How the Eurasian Economic Union should be estimated?

For a long time countries that were once a part of the Ussr coexisted with Russia in a single economic system which was destroyed by the collapse of the Soviet Union. The Commonwealth
of independent States (Cis) built instead of the Soviet Union fulfilled its tasks of a peaceful breakup and dialogue between the republics. nevertheless, the Cis has been ineffective in solving the
problems of a deeper cooperation in relation to integration.

New horizons for a Greater Eurasia.

The present article was inspired by Michael emerson research Towards a Greater Eurasia: who, why, what and how which raised a lot of far-reaching ideas concerning the future vision of a
Greater eurasian community on the crossroads of globalization and integration. The author shares the pragmatic and evolutionary approach of emerson towards modernization of asem andtransforming it into a coordination mechanism bridging european and asian major regional players.
The author considers that the Ukrainian crisis over the EU-Ukraine association agreement (Free Trade deal) highlighted that the international community is confronted nowadays with totally new
challenges to its security and stability not directly connected with traditional political and military factors.

The eurasian economic Union has sparked a debate in the literature regarding who it benefits and what its consequences would be. This paper reviews the argument put forth by Michael Emerson that Europe and asia should grow together to form a Greater Eurasia. I use this initial argument as a springboard to examine the american literature regarding the formation of the EEU. I do this by examining four key components: benefits of the formation and expansion of the EEU, difficulties and concerns regarding the formation and expansion of the EEU, the local perspective, and the implications for the European Union and the United States.