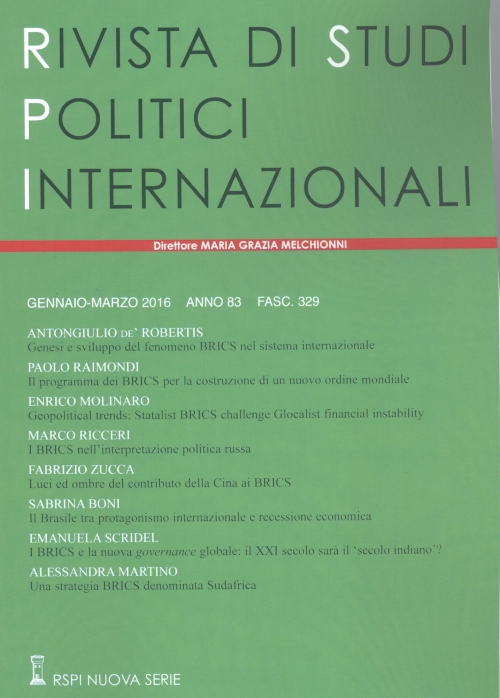 The acronym BRIC, created in 2001 to indicate an affinity in the dynamics of economic development of Brazil, Russia, India and China, in 2006 has taken, because of the initiative of Russia the significance of an association of States, which compactly continue to highlight the need to adapt the cooperation mechanisms of the international system to the new economic and political realities of the twenty-first century through the reform, but not the abandonment of the principles and the sites of dialogue and decision-making created after World War II. Expanded
with the inclusion of South Africa, the format has become BRICS and by the recurring rejection of recent military actions and sanctions of the West, it evokes the risk of a repetition of the
dynamics that led to the formation of the Entente in the early twentieth century.

Working on official documentation produced by the BRICS summits and by the most important economic and political international organizations, the Author intends to show the global strategic
importance of the BRICS coalition which goes much beyond its non secondary relevance as a new economic and political block. Seventy years after its creation, the Bretton Woods system, in which the dollar has been the only currency of reference in trade, in finance and in the monetary reserves, has concluded its historical cycle. Time has come to create a more transparent and balanced new economic order in which the emerging markets became the main motor of development.

The Author suggests an innovative scientific methodology for an effective prediction of geopolitical trends, with special reference to the political-economic BRICS organization. The assumption that economic and political élites use sophisticated tools of mass manipulation to influence people’ minds and the interpretation of geopolitical events is crucial to any correct analysis. Two élites in competition with each other apply their respective opposite and
complementary Statalist and Glocalist model of collective identity to affect international dynamics, alternating cyclical success throughout history. Statalists propose the idea of State
boundaries as limits of collective identity, while Glocalists suggest alternative trans-boundary or intra-boundary identity models.

The Author illustrates the Russian point of view on the BRICS’ international initiative and reconstructs the set of the underlying reasons, the strategic goals as well as national interests that
the Russian Federation intends to protect and deal with by the set up, promotion and widening of the action’s areas of this important coordination. The thesis presented in the article is that the
main reasons of the Russian Federation are rather political than economic. Such thesis is supported by the analysis of two authoritative Russian contributions: one by the Director of the
National Com mittee for Research on BRICS, Georgy Toloraya, and another by the Russian Institute for Strategic Studies-RISS with the Report 1.2016; as well as thorough an in dept examination of the official documents of the seventh BRICS Summit held in Ufa, Russia, July 8th-9th, 2015, and of the numerous initiatives implemented in the following period.

The Author illustrates the China contribution to the BRICS coordination and performs an in-depth analysis of the current, open problems in the development dynamics, both within the country and internationally. In particular, the Author analyzes the possible impact of the growing differences between the BRICS member States on the implementation of the common platform and the terms by which the specific national interests will be combined into a larger common interest, to internationally assert an incisive leadership of the BRICS.

The Author was inspired by a lecture on the current foreign policy of Brazil held in Rome by ambassador Celso Amorim for CESPI, October 2015, to rebuild the great dynamism and design
followed by Brazil in the Latin American continent as well as on the world stage especially over the years from the turn of the century to today. A dynamism that emerges as based on certain
economic strength, strategic geographical position, wide availability of natural resources; but above all on a precise article of the Constitutional Law of 1988, passed after two decades of
military dictatorship.

The article focuses on the development of the BRICS – the so-called emerging countries, Brazil, Russia, China, India and South Africa – in the international arena; on the dominance of the economic dynamics over the political ones; on the economic power as the driving-force of the new global governance and the restructuring of the international organizations.

When Jim O’Neill, Chairman of Goldman Sachs Asset Management, coined, in 2001, the acronym BRIC to designate major emerging national economies destined to lead the global economy, he was referring to Brazil, Russia, India and China. Definitely he didn’t consider South Africa one of them because of its economic characteristics, too different from those of the other four States. So, with the inclusion of the African State in the economic aggregate, in 2011, the world started to consider what contribution the new member could provide to the group. Very soon, it was realized that the accession of South Africa was an economic and political strategy of the BRICS.