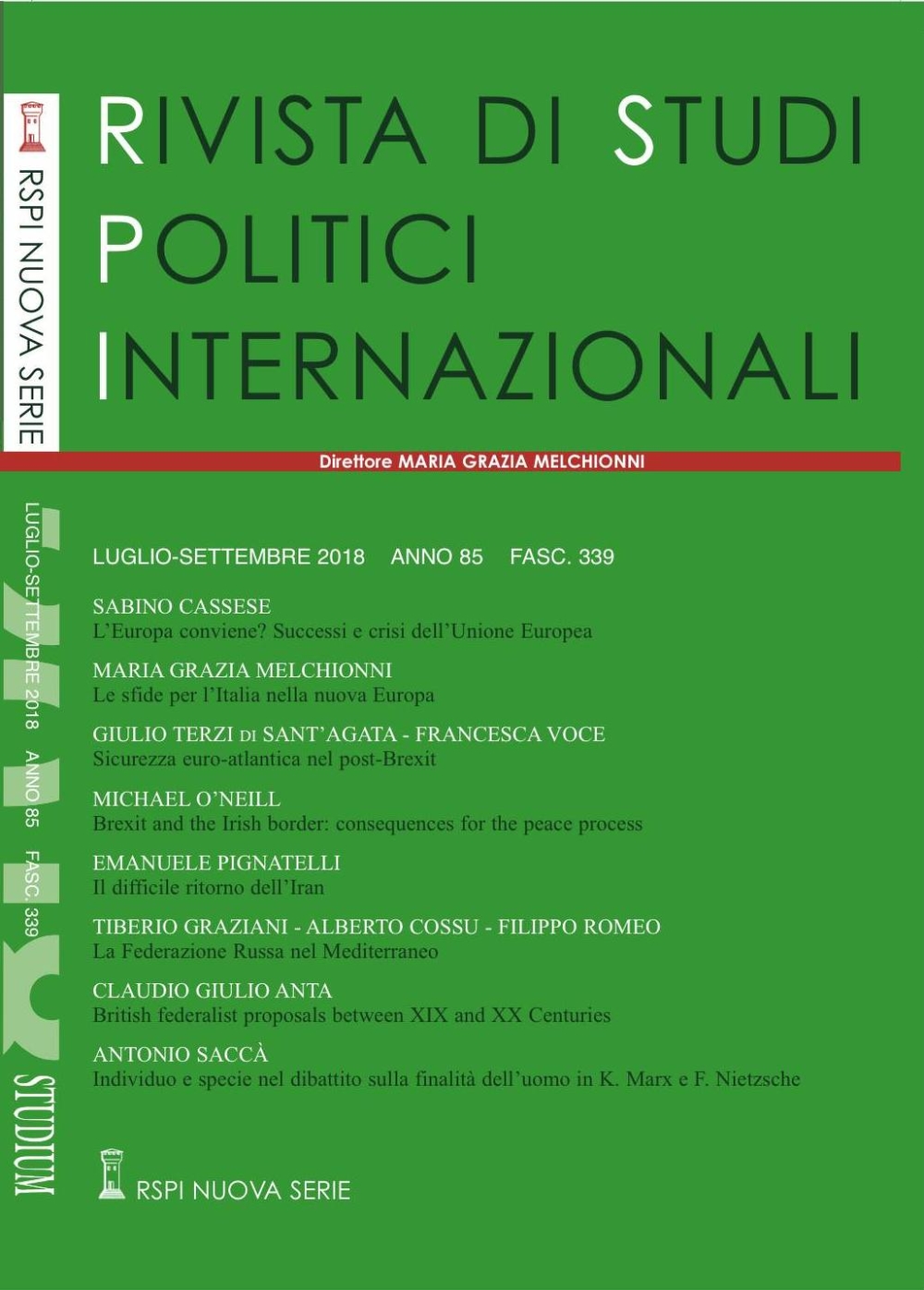 In this article the Author describes the European Union as an original construction that not only developed itself rapidly, but also attained with great success its principal objectives, among them the peace in Europe. On the basis of an analysis of the structures and processes characterizing the evolution of the EU, and also of the balances and opportunities created, some possible bright futures can be foreseen, notwithstanding the oppositions born in some member States.

The new characters of the EU in the post enlargement and the post Brexit as well as the political role of Italy in the Union are the subjects of the contribution. The Author first deals with the great enlargement towards East and North and with Brexit; on the basis of the transformations entailed by them, she analyzes problems and perspectives in building a great political Union.

The European Union (EU) is the largest economy in the world, a robust democracy and a stable society. If the Union and its member States represent such an advanced reality, why their global influence remains below their weight? Geopolitical developments add new threats to those already assessed by the Atlantic Alliance and the European Union. A trend defined for a long time
‘Western imperialism’ is resuming its strength, but on a different side.

Brexit and the Irish border: consequences for the peace process

The decision of the 2016 British referendum on EU membership to take the United Kingdom out of EU will have significant and lasting consequences. For the United Kingdom and its relations with European neighbors, for the constitutional fabric of the British State, and for the EU itself at a time of rising public anxiety over the future of the European project. The consequences of this decision will have no greater impact, however, than on the still-fragile peace process known as the Belfast Agreement of 1998 negotiated by parties representing the provinces’ principal cultural communities and the governments of the United Kingdom and the Republic of Ireland.

Ranking as the seventh country in the world in terms of oil reserves and second for gas, as of today Iran is experiencing two kinds of clashes, both domestic and international. As for the domestic side, the moderate government led by the premier Ruhani is facing several challenges because the population is disappointed by the lack of the expected positive results of the nuclear agreement (Joint Comprehensive Plan Of Action, JCPOA), signed in 2015 with the West and is expressing harsh criticism for the widespread corruption and the limitations to the political and economic freedom that deny any development perspective to a very ‘young’ Country, where almost 75% of the populations is under 35.

The article depicts the strategic significance of the Mediterranean region in the global context. Beginning with the changes taking place in the area, it outlines the political, military and economic strategies that Russia is implementing to secure a significant role in this area of the world. As a result of the military intervention in Syria, the Russian Federation has acquired a leading player role in stabilizing the area and moving it towards a lasting peace.

From the 1860s federalism became a subject of study for several thinkers and academics beyond the English Channel. Initially it was possible to observe at least two main interpretations: a first group of intellectuals was in favor of a federal reorganization of the British Empire to make it as solid as the United States; while a second group advocated a federation of European countries to create a peaceful continent.

After the Enlightenment and the French Revolution the Reason was identified with God and God with the Reason; after the German Idealism particularly of Georg Friedrich Hegel, God and the Reason, becoming dialectic, were realized in History. History itself became rational and divine. Not everyone was persuaded of the evolutions of this thought. Those who believed the inquiry into the ultrahuman destiny of human being to be fundamental, they considered such restriction to the History in the human survey (Soren Kierkegaard) as a deceitful lessening. Those who did not consider the human path as inevitably progressive, derided the presumptive triumph of the Reason, even though dialectic-dramatic (Giacomo Leopardi, Arthur Schopenhauer); others sharply caught a conclusive and shut total loneliness of the individual, and consequently, with the end of
our own individuality, a complete nothingness was attained (Max Stirner).