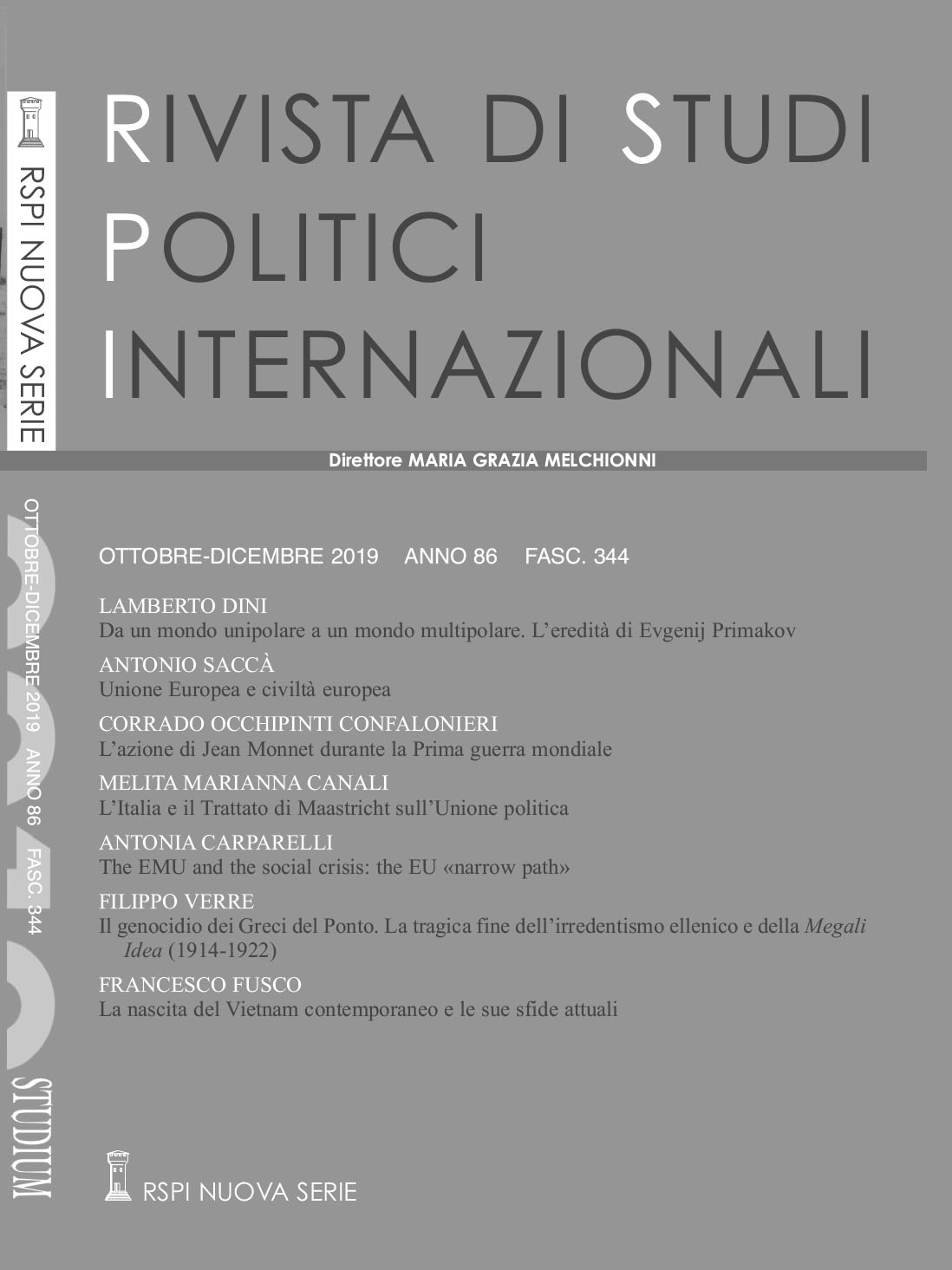 Elucidating the image of Evghenij Maksimovic Primakov the Author starts with an analysis of his writings, followed by an examination of his work as Minister of Foreign Affairs on the basis of two principles: to defend the Russian vital interest of national security and to resolve international conflicts without waging wars. Primakov made meaningful steps to bring Russia nearer to Europe and to NATO; the latter, in his view, should not be extended to the former Soviet Republics.
The emersion of a multipolar world did not escape to the attention of Primakov, who connected the processes of globalization to the progress in the field of information, communication and transports; and he upheld the place of importance of Russia in the new multipolar context.

The Author believes a real European civilization exists with peculiar connotations, that cannot be found in other civilizations. These characteristics date back to the classical antiquity of Greece and Rome, to which Christianity and both liberal and socialist laicism were added. The focus of these components gave rise to a civilization elevating beauty, the value of the single person, the conscience of the individual death, the importance of science, the plurality of choices both ideological and religious, the separation between philosophy and religion, right and religion, the double consciousness both national and European.

What role Jean Monnet had in inter-ally organization during First world war? The Author reconstructs the stages of cooperation who had an unexpected success thanks to the progressive ability of men coming from different countries to be able to dialogue, setting aside national selfishness in the name of common sacrifice, which led to the victory of the alliance.

The shifts in the international system resulting from the fall of the Soviet Union brought radical changes to the geopolitical order in Europe and led the European Economic Community to rethink its role and structure in order to adapt to the forthcoming Eastern enlargement. The reform of the institutions and of the decision-making process appeared to be a necessary step in order to ensure the proper functioning of an enlarged and diverse Community.

The EMU and the social crisis: the EU «narrow path»

The expression «narrow path» has been repeatedly used with reference to Italy and to the many constraints within which the Italian governments had to operate to reconcile the reasons for growth and those of compliance with European fiscal rules and financial stability. However, even the European authorities, and particularly the European Commission, had to move within a «narrow path» defined, on the one hand, by the requirement to respect the common regulatory framework, and, on the other hand, by the need to take into account the specific hardships of individual Member States, and prevent dangerous institutional and political conflicts.

In the chaotic and complex final phase of the Ottoman Empire, the central authorities of Istanbul committed terrible atrocities against non-Turkish ethnic groups that were part of the State. Often, experts and scholars correctly cite the Armenian case as a paradigm of Turkish brutality of that period. In fact, it was the first genocide of the twentieth century, a century that sadly went down in history due to brutality and massacres committed towards the minor circuits of society.